Madison Community Montessori School opened its current location in the fall of 2012. We now call this beautiful, nearly 22,000 square foot, state-of-the-art Montessori facility our forever home, where over 150 students from 15 months to 14 years of age eagerly arrive each day to quench their thirst for knowledge. In fall of 2022, MCMS will celebrate its 50th year of providing Madison area children a rich Montessori experience and exceptional education.

1978: Carol Alver becomes a Montessori consultant and hires Dorothy Zografi as a Children’s House Guide to replace her in the classroom.

1990: The Toddler Program starts at MCMS. 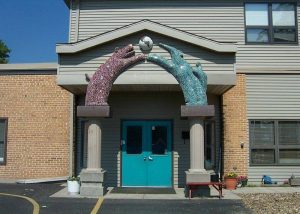 1992: The Elementary Program begins with nine students and with Mary Lee Gleason as the Guide. MCMS has 84 students enrolled.

2001: Research begins on the possibility of starting an Adolescent Program.

2002: In January, a second story is added to the Beltline Highway location to accommodate the school’s growth. Later that fall, the Adolescent Program launches with four students. MCMS has 114 students enrolled.

2006: Dorothy Zografi retires as Head of School and Mary Lee Gleason is hired as the new Head of School. The Lower Elementary Program splits into two classrooms, and the Annex space next door to the school building houses the Upper Elementary and the Adolescent Programs. MCMS has 126 students enrolled.

2009: Mary Lee Gleason steps away from MCMS and Vicki McCarthy is hired as the new Head of School. MCMS receives notice that the Beltline location would be subject to eminent domain by the Wisconsin DOT due to proposed highway renovations.

2010: In order to prepare for the upcoming move, MCMS reduces to two Children’s House classrooms, and the Upper Elementary and Adolescent Programs move out of the Annex and into the main school building.

2011: After a long two-year process, MCMS breaks ground in September at its new location in Middleton. The school’s name changes to Madison Community Montessori School.

2013: The third Children’s House classroom reopens at MCMS, and the total enrollment grows to 145 students.

2016: The Adolescent Program grows to 23 students, and a third Guide joins the team. The total enrollment reaches its historical peak at 190 students.

2018: To meet the growing needs of the school community, a second Upper Elementary classroom opens and our Adolescent Program moves into its new space, with their very own kitchen, in our lower level.

2019: Vicki McCarthy announces plans to step down at the end of the 2019-2020 school year, and a search for the school’s new leader begins.

2020: In spring, MCMS moves to virtual learning because of the COVID-19 pandemic. Erin Freiberg steps in as Interim Head of School for the 2020-21 school year. In addition to in-person learning, Learning Out and Learning from Home are introduced as options for children during the pandemic year.