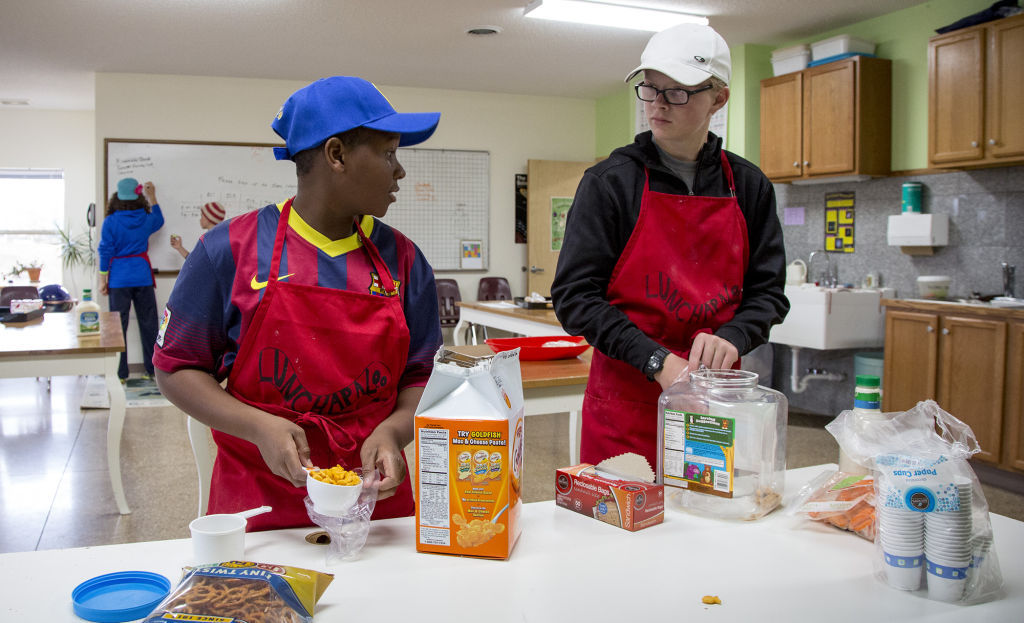 [This post originally appeared in The Wisconsin State Journal: https://madison.com/wsj/news/local/education/local_schools/school-spotlight-montessori-students-run-lunchapalooza-meal-program-at-school/article_aaa5d94e-8df9-5de1-bb10-7af62ce03ade.html]

If only they could drive themselves to the store to get supplies and sign checks, the 10 seventh- and eighth-graders at Madison Community Montessori School would be completely independent in their weekly undertaking to serve lunch to nearly 90 people at the school.

As it is, the students purchase, prepare and deliver orders to students, handle customer complaints, balance the checking account, advertise, and hold business meetings to discuss student input and decide how to spend their proceeds. They also choose and negotiate with vendors.

The lunch program, which was started about 10 years ago, was originally called Pizza Day before a student suggested “Lunchapalooza” some years ago, which is apt because it has become much more complex than simply serving pizzas delivered to the school.

“It’s good experience,” said eighth-grader Christopher Queoff, 13, Lunchapalooza co-manager. “It helps raise money for outings and things we can do.”

In addition to paying for field trips and classroom supplies such as wood for building projects, the money pays for a year-end overnight trip .

“It’s run really nice,” said fifth-grader Owen Gibson, 11, who had ordered a slice of pizza, a bagel with cream cheese, yogurt, applesauce, carrots and half a banana.

While students have a number of options when they place their orders, a portion of fruit and vegetables for 75 cents is mandatory.

The students recently added pasta to the menu. Last year, salads made with lettuce grown at an aquaponics facility were put on the menu. The lettuce comes from Clean Fresh Food, which is owned by the family of seventh-grader Jack Knight, 12, who is the Lunchapalooza accountant.

The lettuce decision reinforced what students were learning in food science and the entire project fits in with the study of economics and math, said Johanna Kenney, who is the guide for seventh- and eighth-graders along with Scott McIntyre. In a Montessori school, staff members are considered guides rather than teachers.

Seventh-grader Sophia Gibson, 13, said one of the challenges of running the program is the required paperwork and the hunger she feels while preparing all that food before she can eat.

Each student has found a niche. For example, the other co-manager, eighth-grader Cole Fritz, 14, likes using a computer so he handles related tasks. Eighth-grader Pablo Garay, 13, is in charge of advertising for the program in hopes of beefing up numbers at the school, which has about 130 students who stay for lunch in addition to the staff.

“We just try to get people to order our food,” Pablo said.